You are here: Home / Archives for Newsletter Archives

What was your New Year’s Resolution? Make a good start to 2017 by updating your contact details so that you can be easily found if you are a match!

Thank you to the patients who lent their stories to this campaign. We have been heartened by the response of both our registered donors and the public. The campaign runs until 28th February 2017. For more details, including the prizes which can be won in the lucky draw, read more.

Do you have friends and family members who are interested in registering with SABMR as a potential stem cell donor, but have not yet done so? Get them to read: 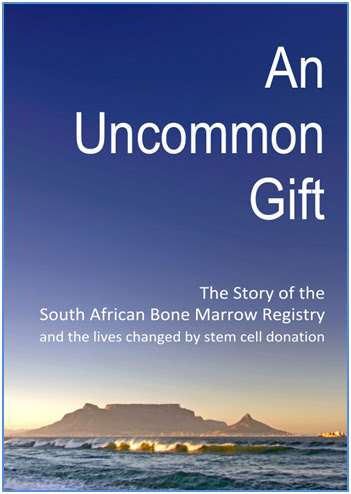 I met three ghosts recently. Well, actually they were the liveliest and happiest ghosts I’ve ever seen, probably because they weren’t ghosts… but they should have been. All three were suffering from life-threatening blood disorders but had, thanks to The South African Bone Marrow Registry (SABMR), been matched with a donor. That donor had saved their life. It was an emotional evening as SABMR celebrated their 25th anniversary and launch of their amazing book, An Uncommon Gift:

The story of the South African Bone Marrow Registry and the lives changed by stem cell donation. In South Africa we all rally around the SABMR and the Sunflower Fund when it comes time to buying a bandana, which we wear for a day or two or wrap around our puppy’s neck for a cute Facebook post.
Aaaaah. Nice!

The money raised from the Sunflower Fund’s annual bandana drive is vital to pay for the costs of testing potential donors and maintaining the Registry, but what’s even more important is that the Registry has as wide and as ethnically diverse a pool of donors on their books as possible to match them with potential recipients.  To order a copy, click here.

It’s such an easy way to save a life. In South Africa, most people only actively register to find out if they are a match for a friend or relative who has been diagnosed with a terminal blood disorder. Sometimes there is a match, but often there is an interminably long wait to find a match from new donors as they join the Registry. The silver lining is that those people who register in an attempt to save a friend’s life are often later matched with a complete stranger who is a match for them, either in South Africa or abroad. In fact, why not put the Bucket List aside and focus on your Duck-It List of things to stop avoiding. Mind you, I think saving someone’s life would fit pretty nicely on anyone’s Bucket List. (Reprinted with kind permission of Simon Lewis, Editor of Leadership Magazine)