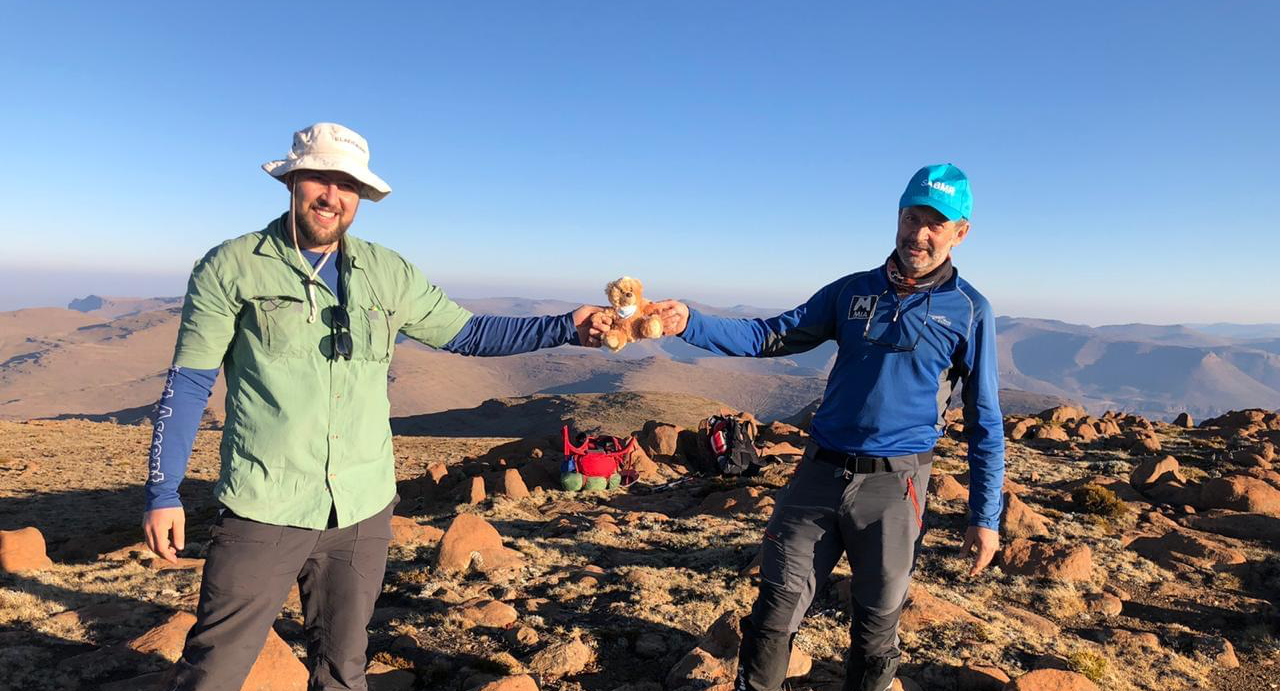 Two courageous hikers will scale the mighty Mafadi – SA’s highest peak situated along the Drakensberg mountain range – between 7 and 9 September to say “thank you” to the countless donors who have saved lives, while raising awareness of life-threatening blood disorders, which are on the increase.

Alicia Venter, Search Coordinator for the SA Bone Marrow Registry (SABMR) says compared to all cancers, blood cancer cases have been increasing at a much faster pace.While recommended, prevention efforts, such as lifestyle changes, tend to be less effective for hematologic malignancies than for other cancers, which makes a blood stem cell transplant, a patient’s only hope for survival.

“The hike is symbolic of the uphill battle that patients face. Finding a donor is much more complicated than finding a blood match. The important factor in finding a suitable match, is the Human Leukocyte Antigen (HLA) – a complex set of genes in a person’s DNA that regulates immunity. These genes also play a crucial role in whether the body accepts or rejects a transplant. Once a patient’s HLA markers are identified, the search for a matching donor begins. Sadly, in many cases matches aren’t found, which is partly due to a lack of donor diversity.

“In SA, there is a dire need for donors of colour. When it comes to matching HLA types, a patient’s ethnicity plays an important role as HLA markers are inherited. Some ethnic groups have more complex tissue types than others, therefore finding a match is most likely to come from someone of the same ethnic group.

“We hope that the three-day summit to SA’s highest mountain top will focus the nation’s attention on the struggles that patients and their families face and how the simple act of becoming a donor can improve their chance of survival.

“As a modern-day generation, caught up in fast-pace living it’s easy to forget about those who are sick and vulnerable and need our help the most. When attempting a grueling challenge, such as summiting a peak, we become acutely aware of how reliant we are on each other and how each life matters. Ultimately, we want to move beyond blood stem cell donation being a mere act of kindness to something which society views as a moral responsibility and duty, because every transplant has the potential to save a life and we each have a role to play,” remarks Venter.

In just under a fortnight, Clayton Coetzee, a 30-year-old adventurer and bone marrow donor from Cape Town and Gavin Raubenheimer, an expert mountaineer from KwaZulu-Natal will attempt to ascend the majestic Mafadi peak, via a route up Judge Pass.

The duo will start at an altitude of 1 470m from Injisuthi Camp and hike for about five hours till they reach Centenary Hut where they’ll spend the night. On day two, they’ll ascend to the Drakensberg escarpment and then summit Mafadi at a height of 3 451m above sea level.

Coetzee says he jumped at the opportunity to be part of such a special project.

“Bone marrow donation is close to my heart as one of my dearest friends got sick with Acute Myeloid Leukaemia (AML) several years ago. It’s then when I heard about the SA Bone Marrow Registry and the life-saving work that they do, and I decided to sign up as a donor.

“It’s a no-brainer to me. Once people realise how easy it is to become a donor and that no needles are involved, more are likely to take up the challenge. All that is required is a simple cheek swab. Should you be matched up with a patient, it’s almost as easy as giving blood. A quick and painless process that could save another’s life.

“I want people to know that blood diseases can affect anyone, regardless of ethnicity or gender. Extending beyond our boundaries or comfort zones – like climbing Mafadi – can be hard but imagine the indelible difference the act of becoming a donor can have on someone else’s life and their loved ones,” encourages Coetzee.

Mountain guide and author, Gavin Raubenheimer has climbed almost every major mountain in southern Africa, and abroad he has guided and climbed in the Andes, Canadian Rockies, French and Swiss Alps, the Atlas Mountains, Kilimanjaro and Mt Kenya. But he says this climb is very special.

“I’ve done more than 100 first ascents of rock and ice climbs in SA but being able to actively advocate for bone marrow donation during this climb, is a true privilege. I hope the hike encourages and inspires the public and all those touched by blood disorders to become donors, and to also donate much-needed funds towards the SABMR’s Patient Assistance Programme.”

He says the hike involves a circular route that goes through large mountains and is usually covered in five days of hard walking, but this time round, they’ll be attempting it in three days.

“We’ll cover an average distance of about 25km on the first two days and gain an altitude of 1 600m per day, therefore the gradient is pretty intense. On the last day, there is an altitude drop of 1 650m as we make the descent from the escarpment back to Injisuthi,” says Raubenheimer.

Over the same period, donors will also be doing cheek swabs in Agulhas, the southern-most point and Musina, the northern-most region of South Africa to help boost donor registrations.

Venter calls on South Africans everywhere during Heritage Month to unite behind the campaign by challenging the public to post photos to https://www.facebook.com/sabonemreg/ of them hiking in solidarity with Coetzee and Raubenheimer or by swabbing their cheeks in other unusual places of the country between 7 and 9 September.

“Let’s all rally together behind the cause and by doing so, change the landscape of blood disorders for the better,” she says.