You are here: Home / Stories about Donors / Brenda’s Story – A Miraculous Journey 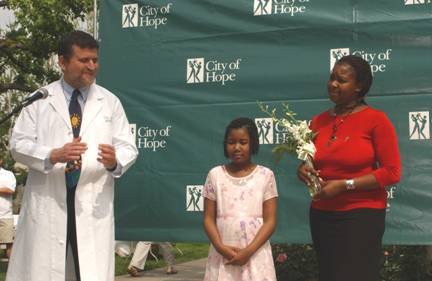 “It was peer pressure” said Brenda Masuku, explaining how she became listed in the SABMR in 1999. “A couple of my friends at work were going to participate in a bone marrow drive for a South African boy who had leukaemia and they urged me to join them”. She is delighted that something done on a whim has resulted in a personal satisfaction she could never have imagined!

The fact that Brenda donated stem cells for a young girl in Lancaster, California, is all the more extraordinary!

All stem cell donors registered on the SABMR are listed on a worldwide database – Bone Marrow Donors Worldwide. It was this search tool that was used by transplant co-ordinators in the USA to identify Brenda as a match for a very ill young girl – Ashley Wilder.

In March 2003, the SABMR was urgently contacted. Ashley’s condition had deteriorated rapidly requiring an immediate bone marrow transplant. On 26 May 2003, Brenda became the first black South African to donate stem
cells to an unrelated patient. While Brenda admits she was nervous, she says the procedure was very easy.

In 2004, Brenda was invited to attend a “Celebration of Life” event where she met Ashley for the first time. This was Brenda’s first trip out of South Africa. It was an extraordinary journey for a young woman who simply followed through on a whim.

“You never know how your actions will come back to you” she said, with joyful disbelief.

“I hope that my experience inspires other South Africans to become donors. I feel a deeper sense of achievement in my life as a result of a quick decision made one afternoon.”