Home » “My transplant gave me my life back” 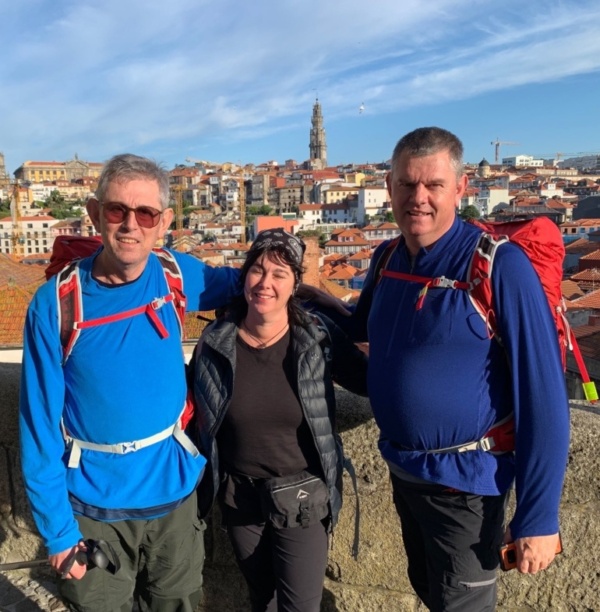 Eighteen years ago, a Stellenbosch resident’s bone marrow transplant cured his lymphoma and saved his life—all thanks to a Malmesbury farmer who became his hero donor. Now, Paul phones Francois every year on the anniversary of Francois’ donation to thank him for a gift “beyond words”.

In 2002, Paul Mouton had a conversation that would change—and save— his life. After several rounds of chemotherapy failed to push back the Small Lymphocytic Lymphoma he’d been diagnosed with the year prior, Paul, 38 at the time, was referred to Professor Peter Jacobs at Constantiaberg Medi-Clinic Hospital.

Professor Jacobs proceeded to put Paul on an intensive, six-month chemotherapy regimen, which succeeded at pushing Paul’s cancer into remission. Paul was thrilled, but Prof Jacobs told him that it would just be the start of his journey to get well. With a high possibility of relapse, Paul would need a bone marrow transplant—and the sooner the better. But before that could happen, they’d need another miracle: a bone marrow donor. And the chances of finding one were just 1 in 100 000.

They contacted the South African Bone Marrow Registry (SABMR), who began an international search for a donor for Paul. Paul’s family was eager to assist, and his parents actively encouraged friends and members of their church community to register with the SABMR. While at first there were no matches anywhere in the world, a donor right here in South Africa soon joined the Registry and was discovered to be a match for Paul.

Jacobs and his team quickly prepared Paul for his transplant, which went smoothly. He remained in the hospital for three months post-transplant, during which his body began to reject food, and soon he needed to be placed on a feeding tube. He tried to resume working from the hospital but was too ill.

For Paul, normally highly active and dedicated to his work, such a major health setback made for a very difficult time. “My whole way of life changed. I was down in the dumps and I couldn’t do anything,” he remembers.

Once this essential isolation period ended, Paul returned home, but his body continued to refuse food. He was eager to return to work, but with a feeding tube and debilitating fatigue, the logistics made it too difficult. But his colleagues recognised that Paul was disheartened and found a way to bring him back into the office, which had long been a source of joy and purpose in Paul’s life. They carpooled Paul to work, assisted with medications, set up a bed for him near his workstation and helped ease his transition back.

Less than three weeks later, Paul felt himself again and returned to eating normally. He was overwhelmed with emotion while recounting the sacrifices made and dedication his colleagues demonstrated during a desperate time in his life.

“What my colleagues did was truly a gift,” Paul says. “The transplant gave me my life back, but going back to work brought me back to life.”

Paul credits his entire support system with the fact that he survived those harrowing years from diagnosis to post-transplant recovery. Through tears, Paul says, “The fact that I’m here today is completely because of the strength of my family, my colleagues, my community, my doctors and nurses. They came to my aid in my time of need and saved my life many times.  It’s not something that happens often. In general, people care about others but they won’t go the extra mile. But here, for me, they did.”

Seventeen years post-transplant, Paul is in good health, back to work, and spending as much time as possible with his wife and family, including his brother and sister who live nearby. In 2019, Paul and his siblings completed the grueling El Camino walk in Spain. They spend each December with his parents in Mossel Bay. “My family is the center of my life,” he says.  “That is a gift I feel very lucky for.”  Paul is still the Head of Research and Development at Traderoot, a financial technology company which he helped found 22 years ago.

Although the transplant is far behind him, Paul gives thanks every day to the people who stood by his side. ‘It’s been a long time but it’s still something very pertinent in my life,” he says. After the experience, which he refers to as a “blessing,” Paul says he’s sought more gratitude in his daily life.

“With illness, you don’t all the sudden become a perfect person or anything like that. But you can change your direction. You can be more grateful for what you have,” he says. “Gratitude is what we’re missing most in life. If you don’t have gratitude for life, you are at a disadvantage. You will live a better life if you learn to be grateful.”

Paul met his donor, Francois Dreyer, a farmer from Malmesbury, almost ten years ago. Since then, Paul phones Francois every year on his transplant anniversary to catch up and swap stories. They’ve met in person a handful of times, and Francois had lunch with Paul’s parents last year after a chance encounter at a café in Calitzdorp. Francois has also been touched by the experience, having quit smoking permanently after seeing Paul fight so resiliently for his life.