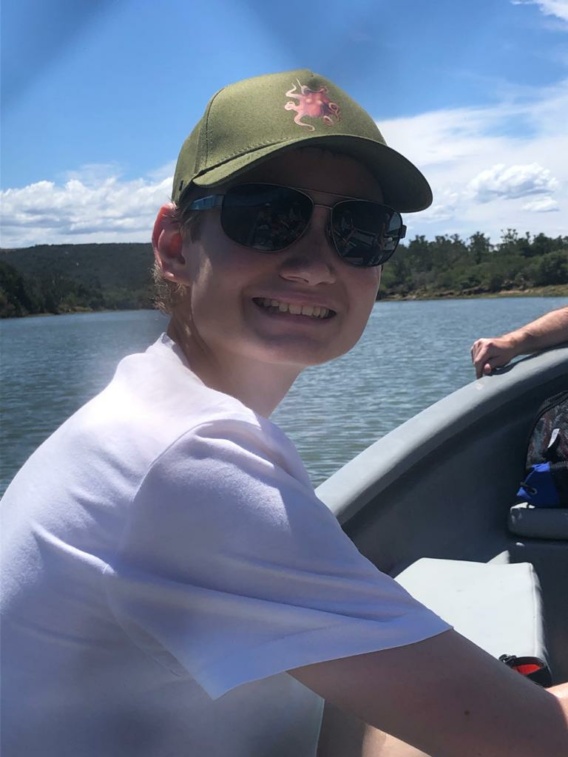 When 17-year-old Robbie Eddles was diagnosed with leukaemia for the third time and needed a bone marrow transplant, his family was determined to get more people registered as bone marrow donors. But it wasn’t just for Robbie. They hoped the drives would help other patients find their donors, too. That wish came true – more than once.

In 2007, at the age of 6, Robbie Eddles was diagnosed with Acute Lymphoblastic Leukaemia. After chemotherapy, the cancer subsided, and Robbie was given a clean bill of health. But five years later, the second diagnosis came: the leukaemia had been hiding in his body, and it had resurfaced. Based on the severity of the cancer, his doctors decided Robbie would need a bone marrow transplant. The family connected with the South African Bone Marrow Registry (SABMR), the organisation responsible for donor search for South African patients in need of bone marrow, and the search began. The SABMR searched the local and international registries, but Robbie didn’t have a match anywhere in the world. Thankfully, another round of chemotherapy successfully, albeit temporarily, beat Robbie’s cancer.

The leukemia returned in 2019. This time, Robbie desperately needed to find a donor – and quickly.

“There was so much panic, because the last time we looked, there wasn’t a donor anywhere,” his sister Gilly said.

For Robbie and his family, the search for a donor was an emotional and frantic time. The family kicked off massive donor drives across South Africa with the help of the SABMR. Robbie’s school, Clifton College, initiated a drive to get matric students registered, including many of Robbie’s friends. Robbie’s aunt shared a Facebook post urging people to get registered with the SABMR. The post went viral, and #RobbiesWarriors was born.

From the beginning, Robbie and his family knew that finding a donor from a local drive would be extremely unlikely. For Robbie, it didn’t matter. “I knew it was a one in a million chance, but I also knew that I’m not the only person with this problem. If in the process of my search, we could find one for someone else – that would be amazing.”

Jane Ward, the SABMR’s Search Coordinator, remembered a quote from Ralph Waldo Emerson that Robbie’s family repeated often during the search: “The purpose of life is not to be happy. It is to be useful… to have it make some difference that you have lived and lived well.”

We wanted to get more people registered no matter what,” Robbie’s mother Colleen explained. “The donating process is so easy, and it’s so important. We knew it wouldn’t be a donor for Robbie. But we also knew that if people were willing to be a donor for Robbie, they would also want to be a donor for someone else, because they understand that person’s plight and can resonate with their pain, desperation, and confusion. You have to realise that you’re probably not going to be able to find a donor for your own child, but you’re doing it for so many others out there.”

“In all of my experience of cancer, I’ve met so many people affected by it. I just want to help people,” Robbie said.

The Eddles family was stunned by the community’s response. “The positive response blew us all away,” Colleen reflected. “The community rallied country wide. Everyone just jumped on the bandwagon. Everyone wanted to do drives and help out.” Besides the drives in Cape Town, Johannesburg, and Durban, the family had calls from supporters in New Zealand, Ireland, Scotland, Canada, Wales, Australia, and more, asking how to register as a bone marrow donor.

For Robbie, seeing his friends jump into action was a guiding light during a very difficult period. “It was amazing to see how helpful people can be, how everyone can come together and help others out. It was really uplifting and warmed my heart.”

Robbie’s wish to help other patients soon came true: one of Robbie’s friends, who registered at Robbie’s first donor drive, got the call to be a donor for a patient in need. Now, another family friend is also in final donor testing.

On her relationship with the SABMR, Collen said, “It wasn’t just us running the show. SABMR came to the party hugely from the very beginning. They were phenomenal. They sent the kits and sent people to help out and run the drives, and everything was just run so seamlessly. The bottom line is: when a child is diagnosed, the parents must work alongside the SABMR. The SABMR will back you up.”

In the end, it was Robbie’s sister Gilly who would be his lifesaving donor, through an experimental immunotherapy treatment and a new form of bone marrow transplant that uses 50% genetic haploid matches. Both the immunotherapy treatment and the genetic haploid match transplant are new procedures within in the last five years; neither was available to Robbie during his second fight with cancer. The experimental treatment, which used CAR T-cell therapy to destroy Robbie’s leukaemia cells, occurred in Israel in April 2019. Three months later, in July, Robbie received his bone marrow transplant in Pretoria. The transplant successfully cured Robbie of his cancer.

Although Robbie is healed, the Eddles family plans to continue with donor drives, including annual matric registration drives at Robbie’s school and others. But Colleen stressed that there’s so much more people can do besides registering.

“There are so many people who want to help,” she explained, “but they’re past the 45-year-old cutoff. I tell people: you can either register to donate stem cells, or you can donate money. If you’re too old, make a monetary donation. Big or small, everything helps.” During Robbie’s donor search, several friends of the Eddles family donated money and computers to the SABMR so that they could hire more staff and register more donors faster.

The same is true for kids under 18, the minimum age to register. Robbie told the story of one friend who was too young to register but helped in another huge way. “He was only 17 at the time and he was bummed he couldn’t register. But he had just won a huge award for the Wildlife Photo of the Year. He came to me and said ‘Please, I want to give you my prize money.’ And I responded, ‘Please don’t give me the money. If you want to help, help the community by donating to the SABMR.’ And he did.”

There are many misconceptions about bone marrow donation that the Eddles family believes inhibits donors from registering, one in particular being the common misunderstanding that all bone marrow donations involve surgery. In reality, it’s only in rare cases when a patient is very young that a donation requires bone marrow from the pelvic bone. For most people, donating is a six-hour, outpatient process that looks a lot like a simple blood donation. There’s no anaesthesia and donors are back to feeling normal in a day or so. The bone marrow is collected from blood, so there is no surgery involved in the donation or transplant. Robbie laughed when he recounted some of the questions his friends had after the transplant. “I had a lot of those questions from people, ‘Wasn’t it so painful, wasn’t it so sore,’ and I was like, ‘No, it’s a blood thing – like taking or receiving blood!’”

Earlier this year, Robbie returned to school in Grade 11. He only has to go every three months to Pretoria for a regular check-up, but besides that, he’s perfectly healthy.

Colleen said, “The SABMR saved Robbie’s life and he now has a bright future ahead of him thanks to them, as do so many others worldwide!”