You are here: Home / Stories about Patients / Zanelle Britz

There has been pain and loss along the way, but stem cell recipient Zanelle Britz is celebrating new beginnings 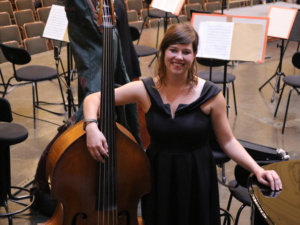 At 32, musician Zanelle Britz is living her dream. A double bassist in the Cape Town Philharmonic Orchestra, she loves living in the Mother City, especially running in the mountains and on the Sea Point promenade. Few people know that seven years ago, the musician with the infectious smile had to undergo a life-saving bone marrow transplant.

In 2010, while living in Pretoria with her boyfriend Werner and studying at Pretoria University, Zanelle landed a job as an ad hoc double bass player for the Johannesburg Philharmonic Orchestra. ‘Since I was little I’d wanted to do that. I’d put on music and play along with the CD, pretending I was in a big orchestra,’ she laughs. When she was asked to perform in a concert, she was thrilled. ‘But I felt so tired. I had lumps in my neck and had tests. My doctor thought it might be tick-bite fever, as I’d been in Swaziland.’ The symptoms worsened, so at her mother’s insistence, Zanelle had further blood tests. ‘I was so excited I’d be playing in a concert with a professional orchestra but I just felt horrible that week. It felt like my insides were spinning. I was off balance. And my hip bones felt funny.’

After the rehearsal, her doctor phoned, tearful. The diagnosis was leukaemia. A bone marrow biopsy the next day confirmed that Zanelle had ALL – acute lymphoblastic leukaemia, a form of white blood-cell cancer – and she was admitted Pretoria East Hospital immediately. After chemotherapy and a month in hospital, she went into remission. She would have ten months of weekly chemo treatment, ‘but if the cancer returned after that, I’d have a very low fighting chance, as the body builds up resistance to the chemo,’ she says. To ensure her survival, she’d need a bone marrow transplant.

Her younger brother was tested but wasn’t a tissue match. Could a matching donor be found? Would medical aid cover the procedure? Fortunately, Zanelle’s mother’s work medical aid had recently switched over to Discovery, which would cover all costs.

The SABMR had been contacted and, to the family’s joy, found a donor in Germany, a middle-aged man happy to donate his stem cells. ‘It’s amazing to think that someone on the other side of the world who doesn’t know me would go through that for me,’ says Zanelle.

Dr Jackie Thomson oversaw the transplant: the donor’s bag of stem cells arrived from Germany and was trickled into Zanelle’s body via intravenous line. ‘I never got to know the identity of my donor but I sent him a package containing a South African calendar, a postcard and a thank-you letter letting him know that the transplant had gone well,’ says Zanelle.

Werner and her mother were regular visitors to Zanelle’s isolation ward, and her doctors kept her spirits up too: ‘They’re just an amazing team. The doctors and nurses cared so much. They were kind and compassionate.’ After a month she went home, bald, thin and craving a burger. ‘I thought, “I’m ready for the world! But I literally couldn’t walk from the hospital to the car,’ she laughs.

After a year of regular checkups, tutoring music and performing occasionally as she built up her strength, she was recovered. She began hiking again, and in 2013 ran the 5km road race in the World Transplant Games in Durban. ‘I trained hard and did the best 5kms of my life!’

Yet a great shock was to come. Two years after Zanelle’s transplant, Werner died of a heart attack while mountain biking. He’d suffered from an untreatable heart murmur. ‘He had stuck with me through everything,’ she says.

A year after that devastating loss, Zanelle received an offer to study double bass at the University of Cape Town, and made the move. ‘It’s been such a hectic time, but it feels like I’m starting afresh,’ she says. ‘God’s grace has been so real, in hindsight,’ she recently wrote on Facebook to mark five years since Werner’s passing. ‘Werner, you inspired me in life and death to always seek God and hold fast onto him. You’ll always be so dear to me, my Awesome. Here’s to the next five years – a new season of health, fullness, restoration, and whatever else He has in store.’