World Marrow Donor Day (WMDD) is celebrated globally on the third Saturday of September. The day will be celebrated in more than 50 countries around the world reaching hundreds of thousands of people and resulting in a great deal of media coverage.

The campaign, which was originally held as a European event in Italy, Spain, France and Belgium, was expanded through the WMDA to a worldwide celebration in 2015. The main objective of WMDD is to thank all donors worldwide including unrelated donors, family donors, cord blood donors, donors whom already have donated, and donors whom are on the global registry waiting to donate. The secondary objective is to raise awareness amongst the general public and decision-makers about being a stem cell donor and the impact of blood stem cell transplantation on patients’ lives. For many children and adults in need of a transplant, we are unable to find a match within the global registry with millions of donors and therefore, more potential volunteer donors are needed. This is especially true for patients with mixed race or from ethnic minorities. To this end, World Marrow Donor Day and the celebratory month of September supports awareness and meaningful engagement with potential donors.

Our website includes information about upcoming events, how to register as a stem cell donor and you are welcome to read our donor/recipient stories. 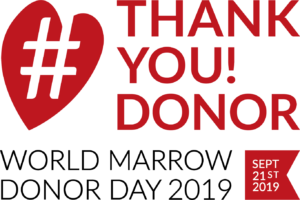 Click here to view a summary of the 2019 campaign

On Saturday, September 21st, the South African Bone Marrow Registry (SABMR) celebrated World Marrow Donor Day with a Donor Appreciation High Tea. World Marrow Donor Day is an annual celebration held on the third Saturday of September, when donors around the world are celebrated for their decision to donate healthy bone marrow to patients in need. The High Tea was held in Cape Town’s Winchester Mansions and featured live music, a sweets buffet, and a photo booth. From early-seventies farmers to young graphic designers, bone marrow donors from all over South Africa came to share stories and catch up with the SABMR staff.

SABMR Director Dr. Charlotte Ingram addressed the guests, thanking them for their potentially life-saving decision to register with the SABMR. When guests were asked if they would donate again, it was a resounding, “Absolutely!” 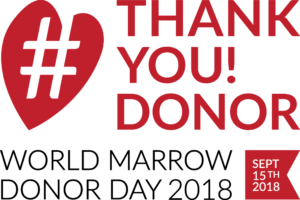 Click here to view a summary of the 2018 campaign

The SABMR’s 2018 WMDD campaign was marked by multiple initiatives: Groote Schuur Hospital, our ‘home’, was lit up in turquoise, our brand colour, for the two weeks surrounding World Marrow Donor Day. Besides media coverage, a dedicated website page and a microsite, we organised a festive ‘cake-off’ with Groote Schuur Hospital staff, and a PSI Global Challenge with PSI CRO (Centurion), to encourage their staff to register as donors. Three influencers spread our message during September: rugby captain Siya Kolisi and personality Siv Ngesi. Also, ‘Bikers for Bone Marrow’ was held on Sunday 16 September 2018: the Cape Town Motorcycle Club, who first became involved with the SABMR in 1996 when a club member was diagnosed with leukaemia, held a 200km drive to scenic Grabouw to spread awareness, riders and bikes decked out in the WMDD and SABMR signature turquoise ribbons.

The Originality Prize was won by the Romanian registry, Registrul National al Donatorilor Voluntari de Celule Stem Hematopoietice, for their moving outdoor light display: view it here; and the Incentive Prize was won by Canadian Blood Services for their ‘Click, click, CAPE!’ campaign. SABMR took the Grand Prize for our multi-faceted campaign.