Hello Reader, it’s ThembaTee! In this story, we learn about the power of taking chances.

When Makome Modiba heard about the SABMR on the radio, he took a chance and registered to be a bone marrow donor. Now, after helping save a life, he’s hoping others will do the same.

One morning in 2009, Makome Modiba was driving to work when he heard former SABMR Director Professor Du Toit discussing bone marrow on the radio. When Makome got to work, he discussed it with his colleagues and phoned the Registry, who referred him to a depot where he could do a blood test. By the end of the day, he was a registered donor. And in 2012, he was matched with a patient in need. 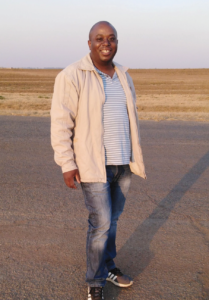 Makome, a father of four from Edenvale in Ekurhuleni, Gauteng, was excited for the opportunity to donate, but his community was against it. “They were worried I would suffer,” he says. “Because no one had ever done it. But I said, ‘There always has to be someone at the start of something, and that could be me.’ If you don’t take chances, then you will be in the dark forever. I told them that I might be able to help someone fight back. And if they don’t make it, at least that person will lose their battle having tried everything.” Nothing gives strength to a patient like knowing there is someone out there who is doing everything they can to help you. Makome, you are a giver of hope—and for that, we will always be grateful!

“When we have a problem, we expect others to help us, but we forget that we always have a chance to help someone else,” Makome says. “Rather than denying them that chance, put yourself in that person’s shoes. The only thing that person wants to hear is that you’re giving them a chance to fight back. If you close that door, you are sentencing that person to death. You are saying, ‘You are not that important.’ For me, they are important.” What a beautiful example for your children! They are lucky to have you.

Makome has been doing his best to share information about bone marrow in his community. Unfortunately, he believes that none of his friends nor family members have decided to register. “Just to donate blood, it takes a miracle to convince them,” he explains. “I tell them, ‘If you are not affected, you think you won’t be. Until you see someone suffering and that someone means something to you, then you want the whole world to jump to the rescue. And if before, you had the opportunity to do something, to take part, to raise your hand and say, ‘You know what, I am available if someone needs help,’ that is on you. But most people don’t want to help if things are still good for them. They don’t see it as their problem.”

At the SABMR, we know how important it is to feel fully informed when you are making a decision about your health. In the info box to the right, you can learn a bit more about why it’s so important that we have donors of all races and backgrounds on our Registry. And if you’re interested in becoming a donor, click the Contact Us button on the menu above and someone on our team will walk you through the entire donation process so that you feel informed before you decide to register.

Another big problem, Makome says, is that “Black people haven’t seen anyone being helped in that way,” referring to bone marrow transplants. “They believe that this is a White person’s disease. That if a person is suffering from cancer, they have been bewitched. Growing up, going to the doctor was a luxury. People could not afford to go. So, it’s a challenge to convince people otherwise.”

Makome donated in 2013. He hasn’t met his patient, but he doesn’t see it as a necessity. “My part was just to give them a fighting chance. I played that part.”

Doing your bit to help others and giving out your hand to those in need is really the true meaning of UBUNTU. Ubuntu knows no age, color, or gender—and people like Makome, who do things for those in need at no particular gain to themselves, are really the epitome of Ubuntu. Remember, “UMNTU NGUMTU NGABANTU” (I am because you are—or literally translated as “a person is a person because of people.”). Makome, thank you for being an ambassador for this lifesaving process in your community. You are saving lives simply by spreading the word!

I appreciate everyone who takes the time to read these stories. Please share with your friends and family so that we can save lives together!