Home » Blog » A MEDICAL MIRACLE—MORE THAN ONCE

Hi Readers, ThembaTee here. I hope that you are well and ready for yet another incredible story of a sweet young boy who is also a fierce warrior.

Join me today in celebrating Aaron, who in just six years has tackled more medical obstacles than most of us will face in a lifetime. It took a bone marrow transplant to keep him alive, but it almost took his life in the process.

A MEDICAL MIRACLE—MORE THAN ONCE

While still an infant, Aaron Lipschitz was diagnosed with a metabolic absorption disorder. The disorder made him unable to tolerate any food besides a specialised hypoallergenic formula, which he received through an intravenous feeding tube. At age 3, after years of complications that baffled his doctors and twice-weekly hospital visits to receive immunoglobulin treatments, Aaron was also diagnosed with Interleukin-12 Receptor Deficiency, a rare defect that affects fewer than 300 people worldwide. After Aaron endured a third, almost fatal attack of septicaemia, his doctors decided to perform a bone marrow transplant. The transplant would be risky, but the medical team decided that they had little choice but to attempt one. 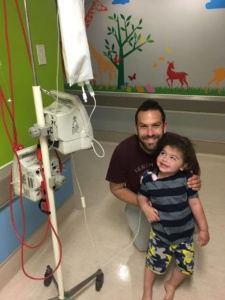 When the SABMR began a donor search, Aaron’s mother, Taryn, says they knew a local donor probably wouldn’t be found, but decided to coordinate drives anyway to make people aware about the Registry. In a single week, dubbed Save Aaron week, over 500 new donors registered, and that number grew as drives expanded in Johannesburg and Cape Town. In 2019, Aaron’s family received a call to say that one of Aaron’s registration drives had helped find a donor for another patient in need.

Aaron received his transplant in August 2018. After an unexpected reaction called a cytokine storm, he spent a month in the intensive care unit at Red Cross Children’s Hospital and another two in isolation. During this time, Aaron was often so sick that he couldn’t even watch Paw Patrol, his favorite show, and one day his face was so puffy that his eyes were swollen shut. His doctors would later discover another genetic variant, Fox P3, that may have been responsible for the reaction.  A transplant is a risky, complex process, and some patients do experience complications. But like Aaron, most people who undergo a transplant are severely ill, and the transplant is a last resort—so the informed and calculated risk of a transplant may be the only option to save them!

Despite the reaction, Taryn still believes the transplant was the right call. No matter what he faced, Taryn truly believed her child would live. “The doctors thought I was in denial, because I kept saying he was going to pull through,” she says. 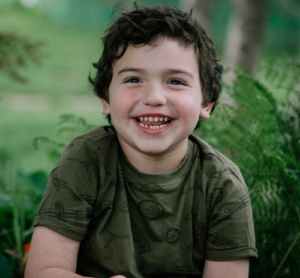 But he did. Three months post-transplant, Aaron went home. Thankfully, since his recovery, Aaron’s time at the hospital has dropped significantly and his doctors have seen a major improvement in his body’s ability to fight infections. He has experienced minor regressions in his health in the last year, forcing him to temporarily return to the hypoallergenic formula, but he is stable, happy to be at home, and doctors are confident that he will get back on track. We are cheering you on, Aaron, and we know you will tackle this obstacle as you have tackled all others!

Nowadays, Aaron is playing putt-putt, soccer, and tennis, taking swimming and golf lessons, playing with his dog Luna, and thriving at Alon Ashel Pre-Primary in Cape Town. And this September, the family welcomed their newest member: a baby sister for Aaron, named Eden! Congratulations, Taryn and Steven!

Only age six, Aaron has already touched many lives. “I have learned a lot from Aaron medically but also just about being a human,” his primary physician, Dr. Deon Smith, says. 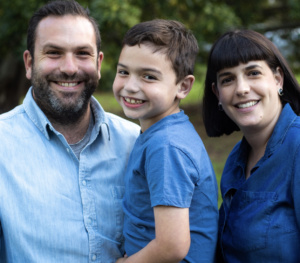 The family would like to meet Aaron’s donor someday, to thank her for her extraordinary gift. Dr. Smith believes that everyone has the capacity to give such a gift, especially when they know a life like Aaron’s might be on the line. In his words, “ordinary people can do remarkable things.”

This story makes me want to hug my family tight! To Aaron’s donor, we at SABMR are truly grateful for people like you, who have given a young child an entire future to look forward to.  Hopefully you and Aaron’s family will meet someday soon to celebrate this selfless gift you gave to their son.  We applaud Aaron’s parents for their faith and strength, and to Aaron—we are so proud of you, and we stand with you on this ongoing journey!
Till next time,