Home » Blog » An infant at home–and a life to save

Hi everyone! ThembaTee here, sharing the beautiful story of a brave new mother who, just six months after giving birth to her first child, took the chance to save someone’s life.

Brenda Masuku became the SABMR’s first black donor in 2003–and just a few years later got the chance to meet the little girl for whom she donated.

An infant at home–and a life to save

Brenda Masuku was the SABMR’s first Black South African donor. When asked about her decision to register, Brenda jokes that it was “peer pressure.” She was working for a medical aid company at the time, and a group of her white colleagues had decided to register during their lunch break after hearing that a local child from Durban was looking for a match. They hoped that she would tag along as well, and Brenda agreed.  Thank you to Brenda’s colleagues for spreading the word about donating bone marrow. Little did they know that their decision to do so would save a life! If you’re thinking about becoming a bone marrow donor, or you are already registered as one, take a minute today to tell someone about it (or even better, share it on your social media!). Someone you tell may just end up saving a little child’s life, all because of you.

Then, in 1999, Brenda got a call from the Registry saying she was a possible match for an American patient who was currently in remission but may someday need a transplant. “They wanted to make sure that there was a donor available if she needed one,” Brenda explained. “I said yes, but I didn’t think it would eventually happen.”

Even though she never expected to donate, Brenda was willing to give should the time come when her patient needed her. “Should I need someone to donate for me, I would need that person to go through with it, so I’ll go through with it,” she remembers thinking when they asked.

A year and a half later, she received the call. The patient had relapsed and needed a transplant. But this time, Brenda was seven months pregnant, and at the time, the injection received before donation hadn’t yet been tested on pregnant women. They deferred the transplant for the time being.

A few months later, they called again, and this time, the patient was in urgent need. With a young infant at home, Brenda agreed to donate. When her baby was six months old, Brenda stopped breastfeeding, received the injections, and donated. A few weeks later she was back to breastfeeding as normal.  This is nothing short of amazing! Childbirth and new motherhood are already difficult enough, and it would have been understandable for Brenda to say she couldn’t handle adding one more thing to that. But perhaps it was her new motherhood that allowed her to see the importance of what she needed to do, because after all, the patient in need was someone else’s child, too.

Some years later, Brenda and her daughter were invited to meet Brenda’s recipient in Los Angeles. They travelled all the way from South Africa to meet her. Unfortunately, her recipient has since passed away, but Brenda is still grateful for the role she was able to play in keeping the young girl alive for a little while longer. “I’m happy that she got the opportunity for more time,” Brenda says.   Even if bone marrow transplants are successful, there is still a chance that the patient passes away if the illness resurfaces or if it took too big of a toll on their body before the transplant. But to give a young child the chance to grow up just a little longer–and to give a parent several more years with the child they love more than anything in the world–is a true gift, and as Brenda said, so worth it.

Almost twenty years later, Brenda now has three children. Her oldest child, an infant at the time of Brenda’s donation, is now 18, and Brenda hopes that she will make the decision to join the Registry. Brenda says that her daughter has enjoyed discussing her mother’s donation with her schoolmates during science classes or when there was an awareness event at her school. 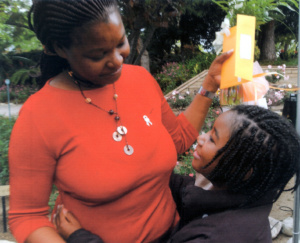 Despite taboos against medical donations in the Black South African community, Brenda is doing what she can to share her testimony with friends and family. “People only realise the importance of bone marrow when they have a family member that needs it,” Brenda says. “The little awareness I can spread, I will.”  For more information on why having Black and Colored donors on the SABMR Registry is so important, check out the info box on the right!

This story is a powerful example of how spreading the word can really make an impact. If Brenda’s colleagues hadn’t asked her to join them in registering, that little girl may never have found a donor. And now, Brenda is doing her part to share news about bone marrow donation, and will likely save lives in the process. Will you help us spread the word and invite more people to come register? As we say, “ISANDLA SIHLAMBA ESINYE”, which means “one hand washes the other”. Let us come together to save more lives. See you for a new story in two weeks!
Till next time,