If you have a minute, take some time and read the phenomenal story of Pieter Le Roux, who after being cured of his own leukaemia, became a counsellor to provide support to patients with cancer diagnoses.

It’s a beautiful example of “passing it on”—of sharing courage, resilience, and above all, hope, with those who need it most. 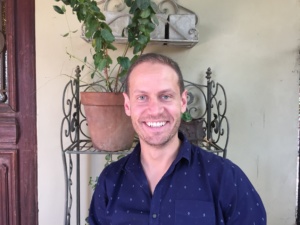 Pieter le Roux, a former pastor at AFM Westdene in Johannesburg, fell ill in March 2014, his skin pale and his body fatigued. After several inconclusive blood tests, a bone marrow biopsy returned with tragic news: T-cell Acute Lymphoblastic Leukaemia. He was referred to Dr. Karen Gunther, who told him that if they couldn’t turn the cancer in twenty days, there was nothing else she could do.

Pieter began six rigorous chemotherapy sessions and went into remission. But a transplant would still be necessary, or the cancer would return, likely worse than before. During treatment, Pieter’s strength was tested. “I had this discussion with God saying, I can’t do this anymore,” he remembers. “Two days later the SABMR called and said we have a donor.” I do believe that prayer brings strength, and it’s incredible to see Pieter’s faith manifested so fully here.

In October 2014, Pieter received his transplant at Pretoria East Hospital. Pieter, his mother, and grandmother greeted every drop of his donor’s blood as it entered his body. “Each one of those little drops that came in, we said, ‘Thank you, welcome, thank you.’ It felt like a second birth,” Pieter says.

The transplant was a success, with engraftment in only a few days. “My donor gave a few hours of his life but literally saved mine,” Pieter says. “Gift is too small of a word.”

Just before his diagnosis, Pieter had opened a private counselling practice. After his transplant, he started visiting other hospital patients to support them with their grief and trauma, his own story providing hope to other patients in need of a transplant. The practice grew and now, Pieter is fully employed as a Practice Therapist in the hospital’s Haematology Unit, to help patients through the emotional rollercoaster of cancer diagnosis and treatment. Every time a new patient is diagnosed with cancer, Pieter provides counselling and walks their journey with them. Now that is courage! I can’t imagine it’s easy for Pieter relive the memories of his own cancer experience every single day, and being willing to do that in order to support others on their own journeys is really selfless. 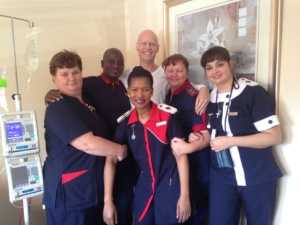 “People ask me, ‘Are you a therapist?’ and I say, ‘No, I’m just a servant. I’m here to serve you for the next while.’ Many are frightened and say, ‘How would you know what I’m feeling?’ and that’s when I share my story.”

On cancer, Pieter says, “I hate the phrase, ‘Person loses battle against cancer.’ Everyone wins. To get up, to come for treatment, to feel the way you do and to carry on anyway– every one of those steps makes you a winner. Nobody loses their battle against cancer. Some of us just get to stay around a little longer.”

Pieter turned 40 last year, with six healthy years behind him. Every year on his transplant anniversary, Pieter invites a few close friends over to celebrate. “We celebrate life. New beginnings. New chances,” he says.

Pieter, the Registry commends your dedication to providing support to those in need. Every day, you are taking the second chance at life given to you by your donor, and sharing it with others by guiding them through the darkest period of their life. Readers, I hope you take away from this the many ways that we can echo the love in our lives by supporting the most vulnerable. As Pieter demonstrates, there are many ways to touch someone’s life — by donating bone marrow, but also by sharing a story of hope with those who need it and speaking positivity into their lives. Just as Pieter shares his stories with the patients he meets, I encourage you to share this story with your friends and loved ones—to show everyone that a second chance is possible. And please follow our SABMR pages on Facebook, Instagram and Twitter for more stories every other week!
Till next time,